One of the neat features of epicurious.com is the ‘quick and easy’ section of the recipe list, which offers simple recipes that involve easy preparation and few ingredients. Today I tried the Sautéed Beef with White Wine and Rosemary recipe, which was certainly quick and easy to prepare. I served the beef over rice pilaf, and the recipe would’ve been great, except for the fact that, as written, it’s pretty incredibly salty. The next time I make this, I think I’ll use just a pinch of salt in both the dry rub and in the white wine sauce, rather than the much larger amount specified in the recipe. Between the garlic, the wine, and the rosemary, there’s plenty of flavor in this dish, so the excessive salt isn’t necessary.

Today I tried something a little different in terms of meal planning. Instead of picking a recipe and getting things at the store, I just grabbed some catfish filets and left. Then I looked for a recipe that at least somewhat matched what I had in my kitchen, and I ended up with Spicy Blackened Catfish. The recipe’s pretty simply; basically, it’s just pan-fried catfish with a dry rub. Since I’ve got a pretty well-stocked spice rack, this recipe won out. I paired the catfish with some Near East Mushroom Rice Pilaf, because I feel it’s worth the 50 cents extra it costs compared to Rice-a-Roni. One note about the recipe: it tells you to ‘discard’ the garlic after using it to season the olive oil, which I think is both a travesty and a damn shame. So, instead of throwing it away, I put it aside and used it to top the filets, which ended up working out pretty well.

I recently downloaded the Epicurious app for Droid and here’s the result of the first recipe we tried: 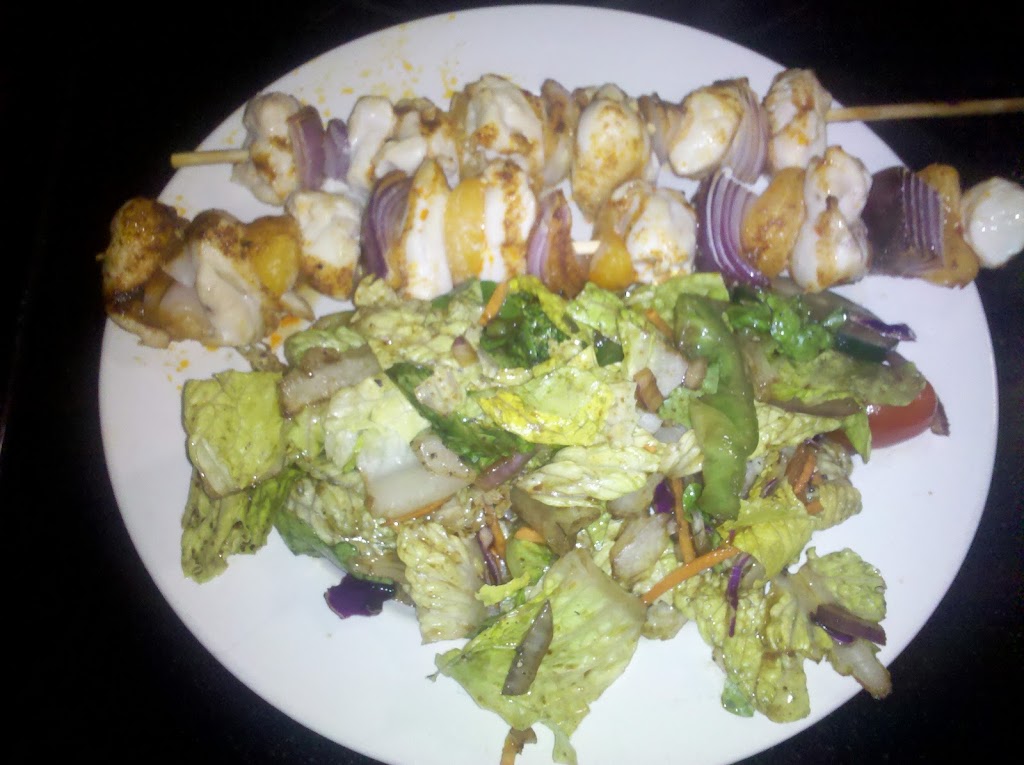 * Although it is of Swiss origins. Don’t believe me? Check the Wikipedia. C’mon, the French don’t do anything right.

Last year (or earlier) I bought my parents a fondue set, which they recently dropped off at my house, apparently after giving up (more Frenchiness) on the idea of ever putting it to good use. Since the cooking pot portion of my fondue maker has itself been lost (tres French, again) for over a year, the addition of the new set once again made it possible for me to cook up some tasty melted cheese. Of course, since I’d never used my own set, it was technically the first time I’d made fondue, making me a true novice fonduer.

I got some advice on cooking the cheese (which should be a mixture of Gruyere and Emmenthaler) from a local market, but unfortunately, their suggestion was ‘Use a double-boiler, no matter what.’ Now, I don’t so much have a double-boiler, or even any pots that fit nicely into other pots, so I had no choice but to ignore the well-meaning advice of my local gourmand (only the French could translate the word ‘foodie’ into something even more pretentious). Instead, I put the fondue pot right on the burner and fired up the stove.

Your standard fondue recipe calls for about a cup of white wine, brought to a simmering boil, with a bit of garlic in it. I went with a Riesling, which is a nice sweet wine of German origin. I picked the one with the screw top, which is a nice feature to preserve cooking wine, and probably makes the vineyard a ‘maverick’ in rule-worshiping Deutschland.

Once you’ve got the wine boiling, I found the best thing to do is slowly reduce heat in small increments until the wine stops boiling, then bring the heat back up just a smidge. Now here’s the key: you need to shred your cheeses, and you need to add them slowly, in small amounts, allowing each previous amount to melt before adding any more. I spent about 15 minutes in total transferring the cheese into the pot, and the result was a (surprisingly) non-burned and tasty fondue. Stirring constantly is obviously also a big help.

Now, here’s what I learned about what you can’t do with fondue: reheat it. After about half of our bread was gone, there was still plenty of cheese, but the fondue candle wasn’t holding a candle to the frigid temps in our house, so it had solidified but good. I tried putting the mix back on the stove, but all I got was boiling wine and a burned chunk of cheese. So, the lesson to be learned is this: either learn to eat like a ninja, or bite the bullet and spend the 2 bucks for a pack of heating gels. Other than that, though, I have to say it turned out pretty tasty, and actually isn’t too hard or complicated to cook. It requires patience, but chances are almost 100% that you have more of that than me in the kitchen.